I ran a 5K road race yesterday – or more accurately I participated in one. I walk, I can’t run anymore. My left knee and hip is so unstable that if I even tried to run, I know I’d end up on the floor (if not the hospital.)

I have several friends who regularly join these local races and when they send out an invitation – if I can, I go. To date, my walking  instead of running has never been an issue. Usually there are enough people to ensure that there is a “walker’s group.”

But the race this weekend was small  – less than 300 people signed up.  When the guy at the front of the line wearing shorts(!) took off his shirt before the race started, I knew I was in trouble. While waiting those last few seconds before the horn blared, I looked around. There were plenty of people in full running attire – bright neon – colored shoes, light-weight jackets, and so, so, may different patterns of running tights (can you really call them leggings when they are so darn expensive?)

These were serious runners.

No one but me had a bulky, green, polar-fleece jacket on top of their polyester-moisture-wicking sweatshirt (purchased on-sale from Target.) I felt like the kid whose mom sends them out trick-or-treating with a coat on top of their costume so they’ll stay warm. But that morning it was cold, in fact it was freezing.

From the beginning of the race I walked. I pumped my arms and kept a constant pace. My goal was not to win, my goal was to finish.

I’ve mentioned this before, but cold weather and I are not the best of friends. As a result of my orthopedic injuries (hit by a car while on a bike) and my Lyme disease arthritis, sometimes I consider getting up out of a chair a victory. But that day I continued walking, up a hill, around a loop and along streets. I kept to my pace, and I kept on going.

The race winner (BTW – it was naked guy) had long crossed the finish line when I turned the corner on the course’s second loop. Even the race volunteers along the route had disappeared – gone back to the brewery to join in the after-race celebrations.

Still I walked, starting to sweat from the exertion, and actually kind of glad I had worn my fleece jacket.

There was no crowd cheering at the finish line when I crossed. The official race photographer had long gone and people were starting to pack up the equipment.

A friend (the one who told me about the race) and her family watched as I passed over the strip that recorded my time. We high-fived and then headed toward the brewery that had sponsored the race. Each runner (walker) was given a bowl of chili and a celebratory beer.  Computers were set up where you could enter your  bib number to look up your time.

When I got home, my kids were starting to roll out of bed and come downstairs.

“How did you do?” asked one, who was rubbing the sleep-sand out of her eyes.

“Yes, well it’s third from my end of the list.” I told her. “I was actually third from last, but here’s the thing, there’s only one really important take-away you need to know about my participation in today’s race and it is this  – I got up. I did it. And I finished.” 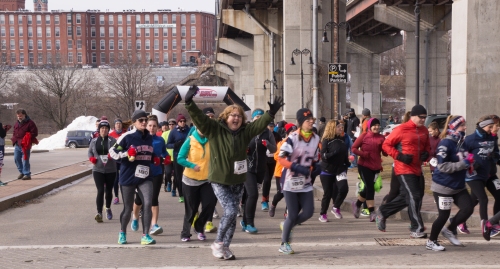