Giardia (Lamblia), like Salmonella, is passed by feces to mouth (yuk.) Unlike Salmonella though, Giardia is not a bacteria, it is a parasite. And can I just say it’s one of the cutest ones out there? 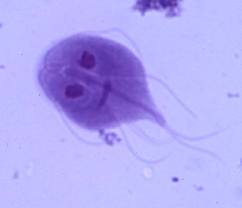 I had the great misfortune of contracting a Giardia parasitic infection a few years after I moved up to New Hampshire. At the time I was a big hiker and the running theory is that I either contracted it by swimming in a lake (ewww) or by eating low bush blueberries (double ewww.)

For months, I had intestinal cramping, diarrhea, and couldn’t eat much of anything. The docs couldn’t figure out what was wrong with me and did test after test. Nothing showed up. (you can only catch Giardia in stool samples when it is in its shedding phase.)

One doc even told me that based on my weight loss and “refusal” to eat, that I was probably anorexic.

Um, take it from me, I have *never* been anorexic, I have yet to meet a baked potato swimming in butter that I’d ever said no to.

Anyway, after about a year of being desperately ill, a doc finally (literally) threw an anti-parasitic prescription (Flagyl) to me as a last resort.

After 3 days of taking it I started getting better (although it took a few years for the damage in my intestines to fully heal.)

Now, almost 30 years later, if you walk into a doc’s office in NH with intestinal issues and tell them that you are a hiker, one of the first things they will look for is Giardia. It’s now that common.

Why am I telling you this?

In some areas of the United States, Giardia is all over the place. (Guess what? New Hampshire is one of them.) I guarantee you that if I cultured my dog’s stool I would find Giardia in there. You’d probably find it in your dog’s poop as well. It’s everywhere.

And because dogs (and other wild animals) poop in yards, if you let your chickens free range, they are more than likely going to pick up the parasite. But like yeast, it only becomes a problem if it overwhelms its host.

If you see your chickens have brown, runny stools you’ll need to get the stools tested. If it comes back positive for Giardia then the bird will need to be treated with some variant of Flagyl – Metronidazole is what you need (look for Fish Zole 250mg, from the local fish/pet store.)

For a 6 lb bird the suggested dosage is to give 1/3 pill (80mg) every 12 hours for 14 days. That’s quite a commitment and enough of a reason to treat single infected birds and not the entire flock.

If one bird is sick though, you may have other birds who are also sick. Keep an eye on the flock and monitor the poop as best you can.

Also, because Giardia is shed through the poop, if you have an infected bird, keep her isolated from the rest of the flock until she is finished with her treatment.

If you are finding that you have Giardia in your flock, you should also inspect your yard for animal waste and remove it when you find it before you let your chickens roam.

Lastly always either use gloves or wash your hands with hot water and an antibiotic soap every time you are exposed to chicken poop (which is a good thing to do anyway.)

With people and chickens sharing space, this is one of those pieces of information you should keep in your back pocket. You may never need it, but if anyone in your family comes down with ongoing intestinal issues, it would be worthwhile to mention to your doc that you raise chickens in your backyard.

I write about the lessons learned while raising children and chickens in New Hampshire. Contact me at Wendy@SimpleThrift.com