We’ve had snow and now we don’t – for the most part. (But there was a lot of snow when I drove to Vermont yesterday so it’s not far away.)

Soon after we had our falcon attack this past fall, I rolled our used Halloween pumpkin under a bush the juvies had started to huddle beneath each day as a way to hide from the neighborhood predator. I figured, under the bush, they could peck at it in leisure and safety.

That falcon really changed the behavior of our flock, it’s rare to see any member randomly roaming the yard anymore, they all either hover near an overhang or hide under a bush and won’t dare come out unless a human caretaker is present.

Which means that the pumpkin, which was whole (we just stuck arms and legs into it) has seen much action. This is all that currently remains of our Halloween pumpkin:

Heavy snow is in the forecast for this weekend. The flock doesn’t like being out on ice and so days (upon days) of being cooped up loom in the immediate future. With the snows, the remains of the pumpkin will become mush, eventually returning its nutrients to the ground.

Who knows, perhaps after the thaw a seed will take root – the start of a new pumpkin – reminding us all that life can spring from hardship – even when evils like falcons abound.

Keep your face to the sunshine and you cannot see a shadow. Helen Keller

Along with fall, change is in the air. Like many others in the tech world, we got caught in the HP re-org and find ourselves, for the first time in a long, long time, on the outside looking in. It’s a shock, but we’ll deal – trust me, in this house we’ve been knocked down before and every time we’ve still managed to get back up.

We’ll do it again. END_OF_DOCUMENT_TOKEN_TO_BE_REPLACED

“Food is for eating, and good food is to be enjoyed… I think food is, actually, very beautiful in itself.“

Last weekend Marc and I celebrated our 24th wedding anniversary by having our annual lunch at our favorite restaurant: Pickety Place located in Mason NH.  This restaurant is a New Hampshire treasure located way back in the woods off the path of a windy dirt road.

Thought I’d give you a little taste of the fall season at Pickety Place.

Lunch was potato/vegetable gratin. (you have a choice of a veggie meal or one with meat) 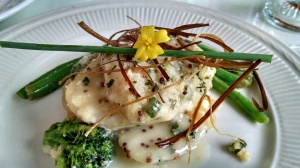 There are 3 lunch seatings at the the restaurant, and hey encourage you to walk the grounds until the lunch bell rings. (so we did)

All around the property you’ll find ripe pumpkins that have been artfully placed. END_OF_DOCUMENT_TOKEN_TO_BE_REPLACED

Lesson 653 – Frost on the pumpkins and feasts

Oh look, the frost is on the pumpkin.

I came home yesterday to find these two beautiful pumpkins patiently waiting by our front porch. They were dropped off by a friend who had remembered that a no-longer needed Halloween pumpkin was one that was better served by our chickens than by the local trash.

I’m saving these delicious morsels for Thanksgiving Day. When we sit down at the table to give thanks for that which we have and for the much appreciated opportunity for all of us to come home to roost – if only for a few days – our girls will be able to feast with us as well.

Lesson 434 – the importance of tribute

What does one do with 70 jack-o-lanterns once Halloween is over?

Why they bring them to our house so that our chickens can play and nibble on them to their hearts’ content.

A friend of ours, as a tribute to her deceased mom’s 70th birthday, carved 70 pumpkins and had them lit on the front lawn for Halloween. That’s a terrific and creative way to acknowledge an important person and life event, in fact it sounds like something I might have done (note to self – tuck this idea away for a future celebration.)

There’s just one problem with having 70 jack-o-lanterns on your lawn on Halloween.

And it’s that the day after Halloween, you have 70 jack-o-lanterns on your lawn.

Not to worry, that’s where our chickens come into the story. We agreed to take as many of the pumpkins as would fit in her car and so on Saturday afternoon, my friend came over with dozens and dozens of carved pumpkins (including one very cool albino pumpkin.) END_OF_DOCUMENT_TOKEN_TO_BE_REPLACED