At a yard sale this weekend I found a treasure trove of old handwritten recipes. Oh sure, there were many recipes cut out from magazines (Robert Conrad’s potato casserole anyone?) but it was the ones written on those 1950’s – 1970 recipe cards (you know the ones with the little flower decorations in the upper left corner) that got my attention.

I have a few of my mother’s handwritten cards and I consider them to be among my most treasured possessions.  (Soon, I’ll be making those chocolate, peanut butter, rice Krispy cookies that I talked about at my mom’s funeral.)

It’s a lost art. Who writes down recipes anymore? It’s more like, if someone requests a recipe we send them the link to where they can find it, time just seems to fly a little faster these days. And even if we had the time to write down a recipe, who has the time to make it other than for a special occasion? Pizza hut to the rescue.

Well I have time (in between everything else I have to do.)

Think about it. When I grew up food was how you showed your creativity. While my mother did work (after the kids had gotten older) most women didn’t, they stayed at home and took care of the flock. Preparing food was how they nourished their families, while the recipes nourished their creativity. When received from a friend, most recipe cards began with “from the kitchen of..” Sharing recipes was the social network of its time.

My kids, who are the sons and daughters of this storyteller definitely know the potential of a good story (or two) when they see it. Helping me sort through the recipes on Saturday night and placing them into two binders, every single one of my kids knew what was coming.

What will we start with first? They asked me. END_OF_DOCUMENT_TOKEN_TO_BE_REPLACED

A few little flock updates from previous threads in this blog:

Trevor, my little hatchet man, has miraculously fully recovered from sinking an ax into his leg. He is currently off at a 3 week gymnastics camp as a counselor and although at times a little tight, his leg, he reports, is “just fine.” On the plus side he sports an 11-stitch long (about 5 inch) Frankenstein scar on his calf which allows him to greatly contribute to the best of war stories around the campfire.

We are all aware of just how lucky we were on this one.

Flies. I know, just quickly, here is the latest catch. Two *more* jars. I’ve heard back from the UNH Coop but they told me to contact someone else regarding my question of whether or not others are complaining about flies.

As an unofficial poll, I did post a question on Facebook about flies being a problem this summer and I have heard from people in various states along the East Coast who are reporting larger than usual numbers. My money is on the mild winter. As always, will let you know when I hear anything.

Tomorrow, Bill Clinton is going to be at a local event endorsing a Democratic NH Gubernatorial candidate – Maggie Hassan – for the upcoming election. I’ll be covering the event for a few blogs and a newspaper, I’ll do what I can to see if I can sneak in Fatti-Madi for a photo or two.

And yeah, speaking of living in NH. Last night another nut job was driving down from Maine to NH with the apparent intent of killing his former employer. His car was packed with guns and he had thousands of rounds of ammunition. This guy admitted to going  to a viewing of the Batman movie with a loaded gun in his backpack.

I’m not sure where we are heading but I fear for the direction.

My plan is to keep them down on the farm for as long as I can.

“The cherished chicks are coming home to roost.”

I told you I would show you Simon’s newest piece of art today and true to my word, here it is. 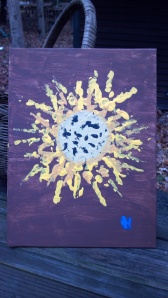 Simon (her twin sister is named Garfunkel) had actually painted the flower part last year but we had never gotten around to putting the “seeds” in so last night, Addy went out to the henhouse and because it was raining she brought little Simon into the kitchen so that she could finish the picture and sign it (in the lower right corner.)

I held Simon who snuggled down into my arms while Addy helped with the paints and canvas. Not a peep was heard from our artist, in fact at one point, I even wondered if she had fallen asleep, but no, it turns out she was keeping one eye open at all times on Pippin, our dog who found this all highly interesting.

I don’t know if you caught that but we had a chicken in our kitchen last night painting and you want the know the best part about that? Not one person in my family thought it was in the least bit odd to do this.

A chicken in the house? We’ve had many before and I imagine we’ll have many more. END_OF_DOCUMENT_TOKEN_TO_BE_REPLACED

Last night I attended a presentation at our local library put on by two debut Young Adult authors (Gina Rosati and Hilary Weisman Graham) It was a great event filled with heart-to-heart advice by writers to writers (and some of the coolest bookmarks I’ve ever seen.) I’ll be reviewing Gina’s book: Auracle – on this blog as it gets closer to its release date. (hey, us chicks have to look out for each other.)

While I was at the library, one of the librarians: Ellen came up to me, “Wendy?” she said. “Wendy Thomas?”

Wondering if I had any overdue fines on library books, I hesitatingly acknowledged yes, that was who I was and waited.

Ellen then went on to tell me a story from a friend of hers who lives in Washington State. Apparently that friend while waiting for a pizza to be ready started reading the free weekly newsletter often found in local restaurants and coffee shops around the town (and I’ve since discovered are also distributed around the United States and in 50 countries.)

One of the “Everybody’s Talking About…” articles in the newsletter was about a chicken owned by Wendy Thomas from Merrimack New Hampshire who had created a piece of art that ended up benefiting a local playground.

“That’s your chicken, right?” she asked me. END_OF_DOCUMENT_TOKEN_TO_BE_REPLACED

When you raise hens for eggs and not for meat, sometimes you have to get a little creative with how you serve those calcium covered delicacies. Don’t get me wrong, even the youngest in our flock can tuck into a platter of scrambled eggs with bacon on Sundays but sometimes those lovely weekend eggs can very quickly turn into weekday “not-again” eggs.

Trust me, if it’s made with eggs, my kids have probably had it. I’ve tried a few recipes in the past, sausage and cheese burger pies come to mind, as do quiches of every type but often it’s just too much of a good thing.

The other night for dinner I decided to try another egg experiment. I had seen a recipe on individual egg cups and thought I bet I could do something like that.

This is what I did: END_OF_DOCUMENT_TOKEN_TO_BE_REPLACED 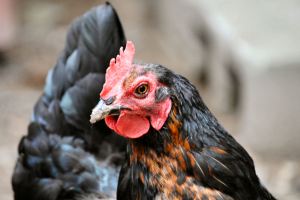 I was eating in a Chinese restaurant downtown. There was a dish called Mother and Child Reunion. It’s chicken and eggs. And I said, I gotta use that one.

And now you know.

I wrote about this recently on my facebook page. The Blizzard Basket is something we do every year and I can’t tell you how much the kids look forward to it. Often it falls on a “snow day” when school has been canceled making it just that much more of a celebration.
****
It’s almost time to put out the blizzard basket (although as my daughter Addy reminds me I’m a bit too late this year, what with our recent Halloween blizzard). Basically, it’s a basket covered with holiday tea towels that is opened up on the first day of a snow storm large enough to keep us home.

We’ve done this since Spencer (our oldest) was little. The key is that it sits in a corner (usually under the Christmas tree), covered, and no one knows exactly when it will be opened (or what will be inside.) The anticipation is delicious. END_OF_DOCUMENT_TOKEN_TO_BE_REPLACED

Those who raise chickens tend to be rock solid, down to earth types. My kind of people. Which is why today I’m going to reach out to you. If we put our heads together I’m sure that we can come up with some wonderful ideas of how to use our chickens to make homemade gifts (and I’m not talking about a big pot of chicken soup here.)

As you know, the holidays are coming upon us (and if you didn’t know, just step foot in your local department store where the decorations will – literally – hit you on the head.) This year, as a family, we are going to try to shop locally and make many of the gifts for our friends, families, and teachers (and when you have 6 kids, there can be many, many teachers.) END_OF_DOCUMENT_TOKEN_TO_BE_REPLACED

Well you know it was bound to happen. When one invites and starts writing about chickens into your life, one starts getting lots of very neat chicken things.

I have one friend (hi Diane) who takes great delight in finding chicken jewelry treasures on the internet. She’s a frequent recipient of our girls’ eggs and to thank us (them) she brings over some of the greatest chicken items I’ve seen (over which I oohh and aahh like a little kid.)

Take for example this blue rooster cocktail (get it) ring? How beautiful is that little gem? To be truthfully honest, I haven’t had the opportunity to wear it yet but just look out this holiday season. I will, no doubt, be the belle of any ball.

And then there is this broach which is sort of like one of those triangle puzzles, just how many chickens can you find within the piece? I love to wear this piece when I give a chicken workshop, (which I do for our town and libraries) it kind of identifies me as “one with them.” It’s my badge of sorority with the chicks. END_OF_DOCUMENT_TOKEN_TO_BE_REPLACED

Lessons Learned from the Flock
Blog at WordPress.com.
Loading Comments...