Lesson 716 – Charlie and the Guinea Hens

This morning I tried to get a quick video of our Guinea hens. Actually, I tried to get the male’s “barking” sound captured but as soon as I got near he stopped, I’ll keep trying.

Instead I have this little clip of our prehistoric looking Guinea hens alongside our other flock members. The only problem was that our ex-house chicken Charlie saw that I was at the coop and so she just had to get into the picture. That’s her with the black head shot hogging the picture at the end. Mr. DeMille, she’s ready for her close-up. END_OF_DOCUMENT_TOKEN_TO_BE_REPLACED

Lesson 366 – Update on our littlest – Alkaia

Time for a littlest one update.

So many of you have asked about Alkaia that I thought I’d give you a bit of an update. This little one, the one we saved from being trapped inside her egg, remains the tiniest of the flock. She is so darn cute. She doesn’t run so much as hop all over the place and, like a toddler, if she hits uneven ground she tumbles over, picks herself up and continues on her way. Like a miniature the Bumble from Rudolph the Red-Nosed Reindeer, she seems to bounce.

Here is a close-up of Alkaia. She is just beginning to get her pin wing feathers, you can see them starting to pop out. Mostly though, she is still covered with her baby down which makes her cute but with the temps going down into the 50’s the other night (just days after the day temps were in the 100’s go figure) she would will not be ready to go out to the henhouse for some time. 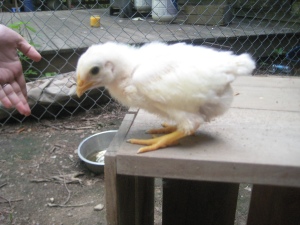 Compare her feathers and size to those of her sibling in this picture. The brown chick is well on her (possibly his – do you see that butt-bling?) way to being fully feathered. In about 2.5 weeks, she’ll be ready to go out to the henhouse to join our adult flock. By the way, the criteria for joining the adult flock is not only possessing a set of full-feathers but also being large enough so that you don’t fit through the fencing (which Alkaia does all the time). 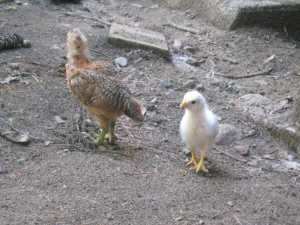 But then there is little Alkaia. Here she is with one of her lighter colored siblings. Not only is she far behind in feather production but she’s also holding in stature at roughly 1/3 the size of the others. A standout definitely and one on which we need to keep a constant eye when we let her outside to play. 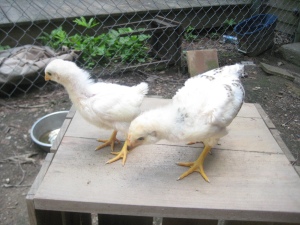 You know that deep feeling of dread you sometimes get in the pit of your stomach. That “oh no, here it comes” sensation when you start feeling the wheels leaving the road – that the older you get, the more you pay attention to?

In looking through the photos yesterday, this one in particular jumped out at me. 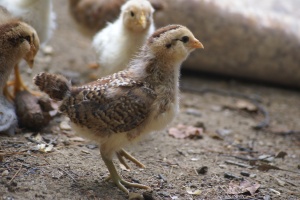 I flagged it and every now and then I’d go back to it. Could it be? Nah, there’s no way, these chicks are only 2 weeks old, there is no.way. on.earth it can be what I think it might be.

But then in one of those great co-incidences of the Universe, Spencer came up to my office yesterday and said “Mom, I hate to break this to you but I think at least 3 of the chicks are roosters.”

Apparently he had noticed that when he put his hand in with the chicks 3 of them would essentially attack him. He said that he also noticed that they had those “things” (combs aka wads of chewing gum) starting on the top of their heads.

Hmmm, I said as I turned to my computer. Was this one of the chicks?

Spencer looked carefully at the photo. “Yup, that’s her, er, I guess now it’s him.”

Now that we are experienced chicken owners, I can tell you that those large feet on that chick? Not a good sign and that little tuft of feathers in the back is probably not butt-bling. It is most probably (but I’ll still give her the benefit of the doubt until we’re absolutely sure) the beginnings of a beautiful tail.

And I know the chick’s tail will be beautiful because I had seen the Dad: Rocky Road.

The farm where I had gotten the fertilized eggs had said they will take back all roosters so I’m not worried about the nuisance a rooster might (will) cause to our neighbors, but I also know that all extra roosters are donated to the local food pantry around the holidays.

And while that’s a noble and on some level very ethical thing to do and I understand that it’s the right thing to do, I still don’t have to like it.

Tomorrow the littlest one gets her name – you’re going to like it.

(and she better not be a rooster)

Lesson 361 – my what big little feathers you have

The growth of these chicks is simply amazing. 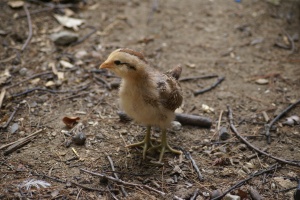 What a big chick

Coming up on their 2 week birthday you can see that many have lost much (but not all) of their baby down and have replaced it with the feathers they’ll need to keep them warm.

Two days ago I turned off the heating lamp in their nursery. Each day after they’re born you’re supposed to raise it a bit higher as the chicks grow feathers which keep them warm. Ah, but then we had the littlest one whom I would always find directly under the light taking her naps, concerned about her welfare I kept the light going a little longer, a little closer than I normally would have.

This week we’re expecting the heat wave that has socked the mid-west, you can bet that no heating element will be on in the chick’s crate. We’ll be covering windows and keeping a fan on to circulate the room air as best we can.

Now to the down-side of baby chicks, as all moms know with growth comes poor table manners and prolific poop. Little chicks make little poops, big chicks make bigger and stinkier poop. Our downstairs is starting once again to smell like a barn (we change the bedding every other day). Not only is there more poop but they tip over the water (soaking the poop infested wood chips) and they spread their feed all over that soaking mess. Old McDonald had nothing on our house.

The results is well, rather odoriferous. We’ll not be having many dinner parties until these chicks move outdoors which if they keep at this rate should be in about 3 more weeks. I can last for 3 more weeks, I can last, I can. 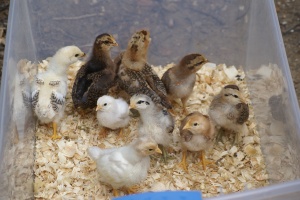 Except for the littlest one – see her in the middle there? She STILL hasn’t sprouted one feather and has retained all of her baby down. Although we’re in the summer months (weeks) of New Hampshire, if she doesn’t have her feathers by the third week of August, she won’t be able to spend the nights in the hen house, it would be too cold for her.

Marc is still trying to deal with the fact that we now have a bunny on top of the dogs and chickens (and kids) – I don’t think I want to even mention the fact that there is a possibility we may be having an indoor chicken this coming winter.