A few little flock updates from previous threads in this blog:

Trevor, my little hatchet man, has miraculously fully recovered from sinking an ax into his leg. He is currently off at a 3 week gymnastics camp as a counselor and although at times a little tight, his leg, he reports, is “just fine.” On the plus side he sports an 11-stitch long (about 5 inch) Frankenstein scar on his calf which allows him to greatly contribute to the best of war stories around the campfire.

We are all aware of just how lucky we were on this one. 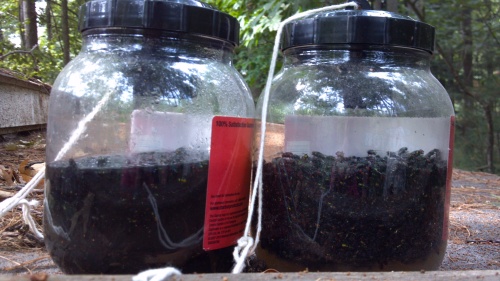 Flies. I know, just quickly, here is the latest catch. Two *more* jars. I’ve heard back from the UNH Coop but they told me to contact someone else regarding my question of whether or not others are complaining about flies.

As an unofficial poll, I did post a question on Facebook about flies being a problem this summer and I have heard from people in various states along the East Coast who are reporting larger than usual numbers. My money is on the mild winter. As always, will let you know when I hear anything.

Tomorrow, Bill Clinton is going to be at a local event endorsing a Democratic NH Gubernatorial candidate – Maggie Hassan – for the upcoming election. I’ll be covering the event for a few blogs and a newspaper, I’ll do what I can to see if I can sneak in Fatti-Madi for a photo or two.

And yeah, speaking of living in NH. Last night another nut job was driving down from Maine to NH with the apparent intent of killing his former employer. His car was packed with guns and he had thousands of rounds of ammunition. This guy admitted to going  to a viewing of the Batman movie with a loaded gun in his backpack.

I’m not sure where we are heading but I fear for the direction.

My plan is to keep them down on the farm for as long as I can.