Marc brought our last chick back to the nest this weekend and while it’s wonderful to see him in the home again, interacting with all of his flock mates, his return raises the age-old question asked by all mama hens whose chicks have left and then returned home again from college. END_OF_DOCUMENT_TOKEN_TO_BE_REPLACED

Holiday greetings from our flock to yours 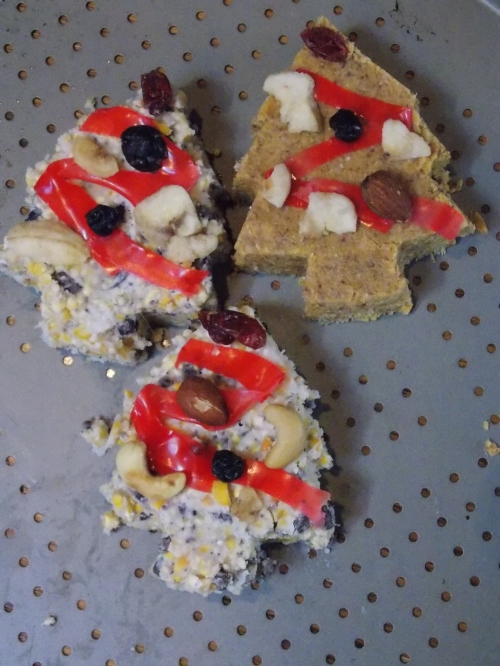 Our annual (annual because it takes a heart clogging 4 sticks of butter) pound cake is in the oven.

And the kids have all had their picture taken with Santa.

Merry Christmas and Happy Holidays from our flock to yours.

Lesson 553 – The rooster in Cincinnati

We’re here in Cincinnati and although I haven’t found a chicken yet, I have found a reason for what I do.

After Trevor had his 2 hour gymnastics practice session this morning, we went to an outdoor square in order to have a pastry and a (long) overdue cup of coffee. As we were sitting at our table, we heard a little boy call out “A rooster! A rooster, mommy!”

Trevor and I both looked at each other in that “No, way, there’s a rooster here??!!” way. I mean what are the odds, that we would go five states away from New Hampshire only to find a male chicken in our midst?

We excitedly looked around, ready to pay homage and respect to the rooster in Cincinnati.

What we found instead was this: 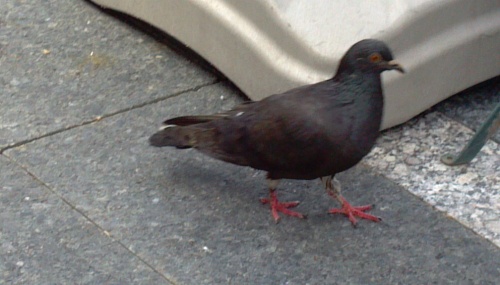 That is what the little boy called a rooster.

And that is why I do what I do. I write about chickens because people have lost their connection to their food and the animals that supply that food. People don’t remember that food needs to be grown and animals that provide our food need to be cared for. We’re all in this together.

They don’t know that we can learn so many lessons from living with our food and taking care of it.

And as long as little kids think that pigeons are roosters in Cincinnati, I think I may still have a very good reason to do my job.

Filed under All things chickens, Backyard Chickens, In the News, Life Lessons, Personal, The kids

I’m in a bit of a rush this morning (and yeah, I should probably queue up my posts but where’s the fun and spontaneity in that?) Trevor and I are flying out to Cincinnati in just a few hours for his gymnastics meet. We’ll be there until Sunday (Mother’s Day!)

I have everything we need (including Tupperware to take food back to the hotel – the boy can eat.) I even have my travel books. When I go on long trips, I like to take a bunch of those books that I gave up on about half-way through. Being stuck in an airport and then on a plane makes even a somewhat boring book start to look appealing again.

I finish all those half read books and then leave them along the way with a sticky that says “Please Read Me” for others to find. My own version of a bread crumb trail from home.

I should have internet access but it will be sporadic. Please be patient with posts, they will get up (and trust me, if there is something, anything to do with a chicken in Cincinnati, I’ll find it and will report back.)

For now, I leave you with a chicken who thinks she is a puppy.

And a newly shaven puppy who thinks he is a rat. END_OF_DOCUMENT_TOKEN_TO_BE_REPLACED

Filed under All things chickens, Backyard Chickens, In the News, Life Lessons, Personal, The kids

Lesson 507 – Eggsactly right for me

I know it’s not Valentines Day (although to be honest, I picked up a heart-shaped plate from our dining room table last night and had to think for a minute about whether or not we’ve celebrated the heart festooned holiday – just too busy these days) but I had to share this little card that I recently received.

As I’ve mentioned before, when you have a flock, you start getting all things chickens. This includes chicken valentines (which you may be surprised, there are quite a few if you know where to look (ebay)) For the most part, the cards usually feature little birds (you’re the chick for me) or eggs.

One particular Valentine reads “ Don’t be so hardboiled, come out of your shell” – a stretch at a chicken/egg pun that I wouldn’t even attempt to make.

Another one, whose poem appears to be written by a third grader tries to seduce it’s receiver with this little gem: END_OF_DOCUMENT_TOKEN_TO_BE_REPLACED

When my son Griffin was about 18 months old, I brought home a changing pad I had found at a yard sale. We didn’t use changing tables, preferring instead to change the babies on the floor (one less thing in the house, right?) and I thought the pad might come in handy. A portable changing surface I could take anywhere.

But then Griffin saw the jellybeans on the blanket and from then on, using the logic of a toddler “what’s yours is mine”, he took it and the pad became his security blanket. At night we would tuck it under his chin and wrap the excess underneath his feet – a way to keep him safe until daybreak.

He always had the jellybean blanket with him and many was the time we had to go back to the daycare for the forgotten blanket. Griffin could not sleep unless his buddy; the Jellybean blanket was alongside him in the night.

As he got older, the blanket no longer fit over his body but still it lived in his bed. At first covering the lower half of his body and then on top of his pillow where to this day it remains. (yes even at RIT) END_OF_DOCUMENT_TOKEN_TO_BE_REPLACED

Lesson 392 – and then there were none

Well, we can’t escape it.

This week is “going back to school week” for the entire flock. Griffin left on Tuesday, our other college student Spencer leaves tomorrow and the rest of the kids went back to school today. It’s the first day of public school.

Here is a photo of Addy and Logan happy to start off the new school year. Addy is in 8th grade and Logan is starting as a freshman in high school. Addy got braces this summer and apparently wants everyone to know. Logan is just happy to be back in his very cool under amour a hoodie. 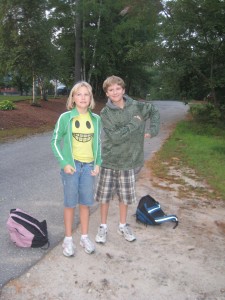 Logan was in a bit of a bad mood earlier this morning. When I asked him why, he said that it was because he had to wake up early. END_OF_DOCUMENT_TOKEN_TO_BE_REPLACED

Last Friday night I went shopping with my daughters Addy and Emma. Addy wanted to buy a pack of press-on fingernails “It says they stay on for 24 hours” she whined to me when I said they would fall off during swim practice (which she has every day). Nope and still nope was my reply.

Then early Saturday morning at a yard sale Emma spotted a nifty gun that spat out Maltese choke-able sized balls. Absolutely not I said when she started pulling out her quarters. Wah – she puffed and went back to the car to sit in the back seat her arms folded across her chest.

Then we went to the local chicken swap and I started talking to the breeder from whom we had gotten our lovely seabright hen: Isabelle and our chicken-chicken Morgane. Along with some chickens (which we didn’t get) she also had bunnies for sale.

Can I hold one asked Addy? Sure go ahead but there’s no way I’m going home with a bunny so don’t even ask. She picked up the bunny and literally squealed with delight.

Pleeeeeeeeeeease? She said making one or two vague promises like I’ll do the dishes everyday for the rest of my life.

Nope. Absolutely not. We. Do. Not. Need. A. Bunny. We have 10 newborn chicks at home remember? If you glued long ears on our dogs they would pretty much look like rabbits, just play with them. END_OF_DOCUMENT_TOKEN_TO_BE_REPLACED

Lesson 327 – a wallet, a gold charm, some bookcases, and karma

Although I am trying to work on a post about the Zombie Apocalypse and chickens (there has to be a way to link them together other than just eating them in desperation and if you want to see some great ideas check out my Facebook page) but I thought I’d put up a post today on a little something called Karma.

This past weekend was the the official beginning of the yard sale season. (and if you know me you know I love yard sales – in fact all my kids would be walking around naked were it not for yard sales).

Anyway, the day was getting on, we were getting hot, but I had Trevor in the car with me and he wanted to go to a few (he always has his eye open for camping and survival tools). We followed signs to one yard sale in particular that was way off the beaten track, but the signs were well done and that usually means that someone has put work into it, so even though it was late in the day (around 1:00 which in yard sale time is like 90 years) we went.

It was a moving sale, they had great stuff. Darn I thought, I should have hit this one earlier.

I picked up a few things, a star keychain for my daughter (Emma) who wants to be a star. A wooden wind chime that sounds like primary colored bones clattering in the wind, and a Life is Good luggage tag for my son who is going off to college next year.

I then picked up a gorgeous handbag (for me) and a leather bag (again for my son to use next year, it would have looked good with the luggage tag on it). When I went to tally up, she told me that she wanted 40 dollars for the hand bag (yack – I don’t even think I had 40 dollars on me) then she wanted 60 dollars for the luggage bag. And while those are good prices they are not yardsale prices. I passed on both items.

She then started to tally up my other trinkets. I could tell that she was not ready to let go of this stuff, she kept talking about how much she had originally paid for each item (which is exactly why I go to yard sales to get the same stuff for cheaper). She held the wallet, she put it down, she picked it up again, she couldn’t seem to give me a price on it.

I should have just said keep the wallet, I don’t need it and probably won’t even use it. If it means that much to you, you should keep it.

But I didn’t, something kept me at the wallet. So I offered 7 dollars for everything (which in yard sale money is like a giving away a gold bar). She took one item out of my batch and let me have the pile.

On Sunday, Addy, Emma, and I participated in a 3K walk to raise money for the Nashua Soup Kitchen and Shelter – an organization that provide basic necessities like food and shelter to those in need. A friend of mine (Lisa) had told me about the walk months ago and even though I’ve had a rough winter with some orthopedic problems I figured a 3K walk? I can do that.

The morning of the walk was when my girls decided to join me. (sigh, late registration fees mean nothing when you are young) They smelled excitement and a day out in the sun with mom. The college: Rivier that hosted the event is where one of my sons goes to school, so we were able to check in with him and chat before the event which is always a pleasure. END_OF_DOCUMENT_TOKEN_TO_BE_REPLACED

Lessons Learned from the Flock
Blog at WordPress.com.
Loading Comments...