This weekend I spent some time going through my mother’s collection of cookbooks. She had quite a few of those church and garden club ones, you know the cookbooks that are sold as fundraisers of which you are obligated to buy?  I don’t mind getting those community cookbooks at all, in fact they often end up having the best “handed-down” recipes ever. So nothing (and I mean nothing) was going to be  moved to the discard pile until every single recipe in every single book was looked at.

And low and behold, I found this gem of a recipe from, of all people, my Aunt Diane. 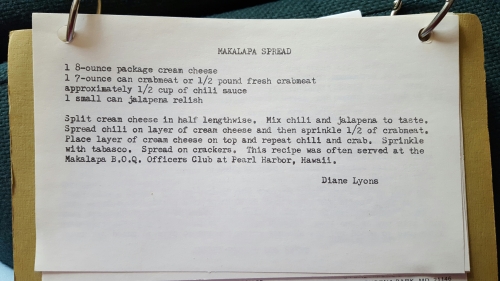 In reading how and where it was served, I thought it would be perfect as a Memorial Day appetizer. Looks straight forward right? It is – provided you know where to find all the ingredients in the store. I had no idea where to find jalapeno relish (it’s near the hot pepper jellies which is near the mustard/olives condiments) and I honestly had to google Chili sauce because I had never used it before and didn’t even know what it looked like (FYI you can find it near the ketchup.) In any event, once I had the ingredients, it was spit spot and done. END_OF_DOCUMENT_TOKEN_TO_BE_REPLACED