The Mayor of Nashua: Mayor Jim Donchess had also heard about our walk. He had called me and told me he wanted to join us as we walked through Nashua’s main street.

Mayor Donchess and an aide met up with us at a public square and they walked and listened to what I had to say about the trip.

At first I told them about all we had seen, but then I started telling them about Lyme disease. About how 5 of my 6 children had it. That it took 7 years and 11 doctors before we knew what was attacking our family. That most doctors in New Hampshire, one of the states with the highest incidence of Lyme disease, didn’t know how to diagnose or treat the disease.

That we were lucky, we had stumbled upon a Lyme literate Medical Doctor who had treated us with high dosages of antibiotics for many months. That some of my kids seemed to recover while others including myself seemed to have re-occurrences.

I told him about the different symptoms and how in my own family, 6 people had Lyme disease and we all had varying symptoms. That Lyme disease destroys your immune system allowing your weakest link to break.

I told that in southern New Hampshire if you are bitten by a tick you have a 76% chance of being exposed to Lyme disease. That didn’t mean you would get it, but it meant you were exposed. If you were bitten by 2 ticks in one summer, there was virtually a 100% chance you were exposed.

I told him about how many people in my town were being diagnosed with Multiple Sclerosis, about how I was nearly diagnosed, and about how my symptoms disappeared when I took antibiotics. About how so many people couldn’t afford treatment for Lyme disease. About how treatment was multi-pronged and it involved medicine, nutritious food, plenty of clean water, exercise and hope.

I told him about the woman in the taxi who struggled to make ends meet. How she had to pay $15 for a ride to work, how she relied on others to get her to a grocery store, how while she didn’t have Lyme disease, she had a chronic condition that required continued care and how her continued care couldn’t even be guaranteed.

We’ve met a lot of good people on our trip, I told him. Some have become life-long friends. But we’ve also met a lot of people who are hurting.

Even with treatment for Lyme disease, I told him, if it’s gone to the chronic stage there is permanent damage. I did another flourish with my hand to indicate my now braced joints.

Lyme disease and its co-infections destroy and kill. It’s as simple as that. It’s as devastating as that.

Mayor Donchess listened attentively. When we had reached the point where it was time for him to go back to his office, we all shook hands. The Mayor is a good man who listened. When he agreed to meet us and walk with us he probably hadn’t wanted to hear so much about Lyme disease, I’m sure he didn’t sign up to hear me stand (walk) on my soapbox for almost a mile.

But I had a captured elected audience and I wasn’t going to waste the opportunity. 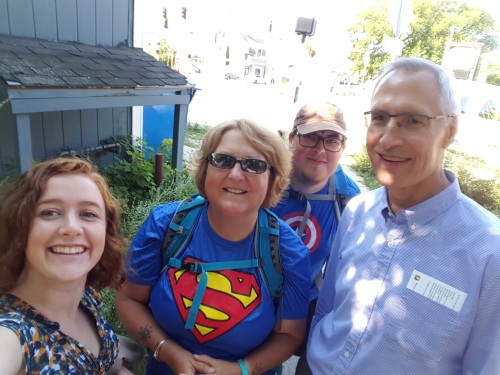