Our path took us through Plymouth, a college town, where we stopped for Thai food (Thai food) for lunch. Griffin and I had learned that we could extend our stay in a restaurant (and therefore extend the time we were off our feet) by ordering an appetizer first and then eating our main meal veeeery slowly.

Even though it was a college town, two people with slightly grubby people with full backpacks draws some attention.

“Where are you coming from?” is what began a conversation with the people the next table over. We told them about our hike, noting that each day we had established more distance from our starting point of the Canadian border. The looks of amazement got more pronounced.

I loved telling people how far we had already walked.

“Yes and it took 10 days of walking for us to get right here, right now.” I said with an arm flourish, ta-dahh!

Even the pain I constantly felt wasn’t able to dim my sense of the dramatic.

After our lunch, chicken, curry, vegetables, with brown rice we walked across the street to some white Adirondack chairs sitting on a vast lawn, set up for anyone to use. We sat in the chairs and just peole watched. It was like sitting in the theater while incredible action shows on the screen. Plymouth wasn’t big, but it was the biggest town we had seen to date. People were talking and joking as they walked by us. Students bopped to music that only they heard through their ear buds. There were bikers. People, lots of people very busy just doing things.

We felt a little disoriented. So much activity after so many days of so little.

I looked over to Griffin, because of the town and college, there was plenty of internet connections for him to use.

“Are you playing a game?” I asked, Pokemon Go being a huge hit in our house that summer.

“No. I’m ordering a pair of stilts.” He clicked a button, turned his phone off and put it in his pocket, “They should be at our house in 9 days.”

At the end of our allocated break (had to stay on schedule) we got our gear on and walked through the town which just sort of stopped at the last store – there was no petering off, there simply were no more stores.

Here a town, there no more.

We passed a clearing on the side of the road filled with concrete structures covered in graffiti. It was something we decided that weneeded to look closer at. Turns out it was a combination mountain bike and graffiti park. Someone somewhere had decided that Graffiti was an art that needed to be maintained.
The message was, feel free to practice your art here, but only practice it here. Please.

Griffin and I walked through the park looking at the bright colors, the bubble letters, the detailed moonscapes. Not competing with, but complimenting the thick woods directly behind it.

Continuing on the road. we walked past a pipe hanging out over a drain. A woman was in front of it filling jug after jug with water. Later we learned it was pure mountain spring water, the kind of stuff, you’d pay good money for to buy in a plastic bottle at a shop. But here it was free and for the taking. Truly living off the land.

We passed her and went further down the road “Look,” I said in a hushed voice, “There’s a deer.”

“We’re in the area of Santa’s Village,” I said to Griffin when it was clear that there were A LOT of deer behind the fence, “Maybe it’s like the Christmas tree farm, the reindeer have to come from somewhere.

“Hello Bambi” we called out to them as we walked by.

Marc and I have always exposed our children to nature. When the kids were little we used to take them to a club swimming pool the next town over. During the summers, we’d spend hours and hours outside in the sun. I’d always point out any wildlife to the kids – “Look over there, there’s a red squirrel.”

We were all thrilled when a robin had built a nest in a tree near the pool, we could watch the mother come and go and we were all excited on the day we saw tiny peeping heads reach out of the nest.

It became part of our routine to watch the progress of the chicks. One day a young hawk (which lived in the area and we had seen on several occasions) spotted the babies. In one swoop he flew to the nest, grabbed a chick and flew away.

My kids had seen this and they all started crying.

“Mom, where’s the baby?” each one asked in turn.

I looked at Marc. Although I was not averse to teaching my young children about how unfair life can be and yada, yada, yada, there’s something out there called survival of the fittest. But I didn’t want to hurt them, they’d find out soon enough that life can be cruel. So I told them that the mommy hawk had invited the baby bird to her house for a playdate with her chick.

My older kids rolled their eyes at me, but the younger ones seemed satisfied. A bullet had been dodged and we could go on with our day.

Griffin and I looked at how beautiful the deer were. Yes, that was probably what was going on. They were being bred for zoos and amusement parks. Mom protection instincts were in high gear.

Then we came across the sign. It was white, heavy plastic, folded in half and secured with stakes and a heavy chain. Large black letters screamed “VENISON FOR SALE.”

Oh no. Bambi wasn’t going to the zoo – Bambi was going to be invited to Sunday dinner.

My stomach turned. How could they? I thought, they were such beautiful creatures.

But then I thought of the meat I bought each week. I never saw the cow with the large brown eyes whose muscle had been ground up for my dinner.

I didn’t see the chicken that had been slaughtered as soon as she turned 3 months old – so that I could eat her breast tissue.

And I never saw the intelligent pig whose bacon I enjoyed, crisp please.

What I did see instead was clean, sterilized food on a white Styrofoam plate, about as removed as it could be from the animal it once was. Was I really any better than people who bought the meat of Bambi home for their family dinners?

The mom in me, the big-hearted kid that I’ll forever be wanted to bring all the deer home and protect them, but I couldn’t.  I didn’t like it, but it wasn’t up to me to like it or not. It simply was the way things were done. People have to eat.

The deer were treated well. They had plenty of food and water and were able to exercise and play until they were slaughtered. In the end it seemed a more humane way of getting your meat than that from an industrial slaughter house.

Once again, I marveled at how much I was learning on our walk. 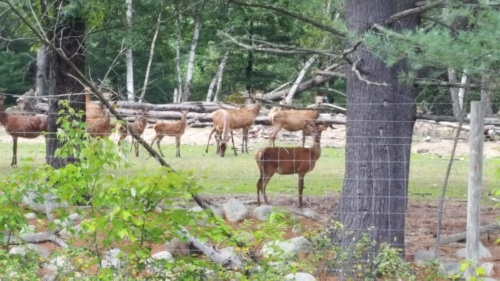