New Hampshire has some interesting stories. One in particular that has gotten a lot of attention is the tale of Barney and Betty Hill.

Barney and Betty were a New Hampshire couple who claimed they were abducted by aliens in a rural part of Lancaster New Hampshire (close to where we were journeying.) They were returning from a trip to Canada, saw a bright light and then found themselves in a different location two hours later with no recollection of how they got there.

It’s easy to dismiss the story (Carbon Monoxide poisoning is a popular one) but there are many strange things about this incident that have never been resolved. The couple was interviewed. After Betty had started getting dreams about the incident she went to a hypnotist for therapy and all kinds of strange memories about the abduction came out. Barney also attended hypnotic therapy and his repressed memories matched Betty’s.

To this day, The Hill Abduction, as it came to be known, remains one of the most credible alien abduction stories around.

And we Granite Staters are very proud of our alien abductions.

Griffin and I passed a gas station with a large mural of a typical alien – green, a large head with big black eyes, skinny extremities – painted on an outside wall. Inside the gas station there were strings of green alien lights strung from one wall to another. You could even buy green glass pot pipes in honor of the incident.

“So can you tell me about Barney and Betty and the aliens?” I asked hoping to get additional “hometown” information.

“Aliens?” the clerk replied. “I don’t know about any aliens, I just work here.”

My chance for a scoop lost, I purchased some juice, thanked him for his time and joined Griffin outside.

“Not going to learn about the aliens today,” I told him.

Because of the natural beauty which brings tourists, there are several attractions unique to New Hampshire in the North Country. When the kids were young, each year we’d pack them up for our annual trip to Storyland, which is New Hampshire’s version of a lovely, clean, smaller (much smaller) version of Disneyland.

To this day, we all still love Storyland.

During our annual trip we’d also stop at Clark Trading Post – a tourist stop that included a train ride where a “wild man’ came out to “attack the train” (which is, of course, terrifying when you are under the age of 6.) At the Trading Post they also had rides, shops, food, and trained black bears which performed regularly throughout the day.

When my mother married my stepfather they took their honeymoon in New Hampshire and one of my earliest memories is gazing at the black and white photo of a black bear performing on a raised wooden platform. They had stopped at Clark’s Trading post those many years ago.

Although it was a yearly stop for us, we discontinued the vacations when we felt the kids were getting too old for Storyland. Instead we brought them to beaches and cities with museums.

Griffin was the first to recognize the distinctive yellow painted building meant to look like a train station.

“I know this place,” he said trying to pull out that deep memory. “This is the place with the bears!”

We weren’t going to go inside the park, but we wanted to stop and look through the gates, both of us remembering the fun times had with the family.

The gift shop was open and I couldn’t pass up the opportunity to use a real toilet so, once again, Griffin guarded our packs while I went in.

I am a tactile person. I like to hold things and collect them. If you doubt me, just check out the corners in our house where all of my things tend to collect. One reason I accumulate so much stuff is because I want to share my experiences with my kids. I like to bring back things from which they can learn something new.

I looked at all the reminders of our family fun for sale in the Gift Shop. I so wanted to buy wooden trinkets in the shape of the train that my kids had ridden – remember this ride? Remember when Trevor lost his pacifier over the side of the train?  I wanted to bring home one of those pop guns that had so fascinated all the kids when they were little.

But if walking for 9 days with everything you needed on your back had taught me anything, it taught me that we didn’t need things that we didn’t need.  I wasn’t going to buy anything I didn’t absolutely need because if I did, I’d have to carry it on my back. And other than a fleece shirt and sleep pants, I hadn’t *needed* anything.

Instead I purchased two post cards, one of the Wild Man for Griffin and one of a black bear for me. Even as I write this, I’ve pulled out that postcard (now a little bent) and it brings me back to our trip, to the bear we saw, to Clark Trading Post, to some special family times.

It’s the memories, the experiences we’ve had that are most important, not the toys and trinkets gathered along the way.

After purchasing the postcards, I followed signs to the restroom expecting to see a door that led to a solitary toilet but low and behold, when I opened the restroom door I entered to see a veritable bank of toilets standing clean and ready for the day. Truly it was the little things, because I was absolutely ecstatic. Clean toilets – surely there had never been such a finer sight.

“Griffin,” I said when I returned. “They have a field of toilets in there. You’ve got to check them out.”

Griffin looked at me in that You sure you’re okay mom? way. “I’m okay” he said.

We said goodbye to the bears, the rides, and the memories (which if course, now included wonderful, wonderful toilets) and we continued on our way. 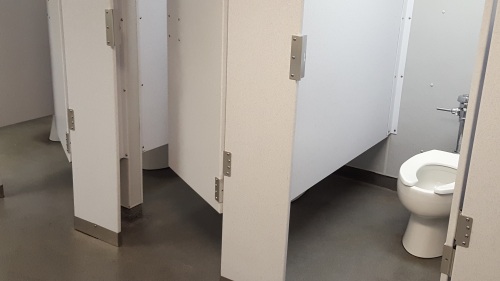