You can tell a lot about an area by the trash (or lack of it) you find on the side of the road.

When we had walked way up north where no one lived and there wasn’t much traffic, we didn’t see any litter. Nada. None at all. The land was pristine.

Once we started to get closer to civilization the litter began to appear, and then after we left the towns, it dropped off again. But even when we saw litter in those first few days, there wasn’t much.

Once on the side of the road we saw an intact large mason jar of canned yellow wax beans. It was a sad sight to see. A grandmother (wiping her hands on a worn cotton apron) probably picked those beans from her garden out back and then canned them on a hot summer afternoon knowing it was a way to provide for her family during the upcoming cold winter months.

And then someone decided to throw all that work (literally) out the window.

I felt for that unknown grandma. I would have cared for her beans.

We started seeing beer cans here and there. Never bottles which made sense, if you’re transporting beer, it’s safer and lighter in cans than it is in bottles. If you were wondering, apparently Bud Light is the beer of the north, we got good at spotting those iconic blue cans from far away.

We discovered that even up north people throw those disgusting dental floss pics on the ground. I can’t even begin to imagine the thinking behind that decision. Seriously, we ended up seeing at least a half dozen of those plastic pics scattered along the roads of New Hampshire.

And while this is not on the scale of dental floss pics, we did see several instances of something else that surprised us.

I kid you not. In all we probably saw about a dozen peels on the roads.

Banana peels break down into organic material, so it’s really not a big crime to throw them out the window, but we wondered at how many people apparently ate bananas while driving.

Until then our only experiences with bananas while walking had been when Marc left us those three bananas on that first day (of which we only got one and (we think) the bears got two.)

Every time we’d see another decaying peel on the road, Griffin would invariably turn to me and wistfully say:

“Dad must have left that for us, but we got here too late.” 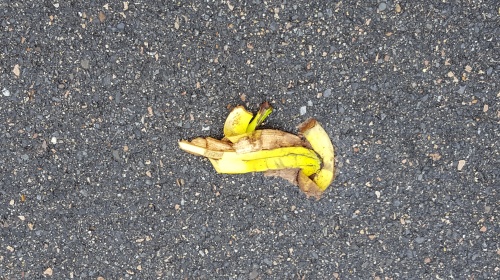