There’s no other way to say it, constant pain and illness absolutely sucks.

Griffin and I had Lyme disease (along with 4 of my other children.) We both had some very serious reasons for our never-ending pain that could at times send us into silent periods of endurance. Our walk was a challenge. Just put one foot in front of the other.

Griffin had always been a happy, athletic, and good humored kid. Since his early days, he was one of the most optimistic people I had ever encounter – my bright sunny, the glass is half-full boy. But after he entered Middle School it was  “one thing after another” with his health.

I brought him to the doctors with a bright circular red rash under his armpit – the office did no tests (even though I questioned Lyme based on the little I knew back then  that having an unexplained rash of some sort could be a sign.) Instead they declared that Griffin had a yeast infection on his skin and they sent us home with a prescription of anti-fungal cream.

“But it’s not itchy,” I thought as they gave me the prescription. I had been a clinical microbiologist for a few years when I got out of college and I had a pretty good understanding of human microbes and pathogens. I also knew from my kids’ yeast diaper infections that yeast on the skin was an itchy and raw business. Griffin’s rash was bright red and formed a large circle under his armpit with no satellite colonies peeking out from the border. However, thinking that the docs knew better than I, I accepted the diagnosis and off to the pharmacy we went.

Don’t count me in the camp of people who say that if given the chance to relive their lives, they wouldn’t change a thing.

I would give everything in the world to change that one day.

Oh, if I had only challenged the docs. If I had only taken Griffin to an office that could identify and treat Lyme disease. In hind sight, it was clear that that red, circular, non-itchy rash was a result of a tick bite.

But instead I trusted and believed his doctors.

There has not been a day going forward where I haven’t regretted that decision.

It turned out the my son’s docs were idiots.

I now know that while it is possible to get rid of a Lyme infection in the early stages, it is near impossible to treat once it reaches the chronic stage when it sets up shop in your body. Untreated Lyme invades your body, its little corkscrew bacteria burrows into your organs, muscle and joints. Symptoms can include muscle and joint pain, nerve dysfunction, twitching, headaches, visual problems, arthritis, memory issues, gut problems, and a whole litany of other symptoms.

Griffin became one of those kids with massive health problems who was shuttled from one office to another.

“He has a sluggish liver.”

“He’s under a lot of stress, has he tried meditation?”

“You should take him to a rheumatologist.”

“You should take him to physical therapy.”

“You should take him to a dermatologist.”

“You should take him to a counselor.”

Over the course of 7 years I ended up taking Griffin to 11 different doctors. All they did for him was give him shots, new pills, or send him to someone else. All they ever did was treat his symptoms.

Never, never did they consider the cause.

It was an off-hand discussion with a local swim team father that finally sent me on the correct path. He had known my son from previous seasons and when I mentioned that Griffin was too sick to swim that year he started asking me questions.

“No it couldn’t be Lyme disease,” I told him. “At one point the docs’ office had done a blood test on Griffin for Lyme disease and it came back negative.”

“Go see this guy,” he told me and he wrote down a name on a piece of paper. When I got home I set up an appointment and then I got on my computer.

What I read made me angry.

You’ll often hear parents of children with difficult to diagnose illnesses say that once they read a story about a child with that illness “it’s like they wrote the story about my kid.” That’s how I felt when I first learned, really learned about Lyme disease – they were writing about my kid.

All of his symptoms were considered symptoms of Lyme disease.

And all of the 11 doctors, including the specialists I had taken my son to, who all worked in New Hampshire where ticks are part of our natural fauna, had not been able to recognize his Lyme infection for what it was.

A tick borne disease that had tipped over into the chronic stage.

It was so incredibly obvious and they had all missed it.

When we met with the Lyme doc, I wondered. Would this be the person who could finally help Griffin? Was it possible that someone could finally figure out what was wrong with my kid and be able to treat the cause?

“It’s pretty clear to me that Griffin has had Lyme disease for a long time.” He said after he had gone over Griffin’s records and examined him. He started Griffin on a slew of antibiotics and other medications. This was a doc who looked at my son as a whole and not as a specific symptom.

And I exhaled the breath that had been held for the last 7 years.

Griffin took his antibiotics and like many people with Lyme disease who begin treatment, he initially got worse. This is a documented condition called a Herx reaction. Although it’s difficult (at times impossible) to watch, it’s actually a positive sign, it means that there is die-off of the bacteria – which when it dies suddenly releases its toxins into your body. Your symptoms get worse, but it means you are on the right track. The Lyme bacteria is dying.

During his initial treatment, when I explained to people that my son had Lyme related pain, I was careful to tell them that it wasn’t the type of pain you saw on TV commercials. You didn’t just rub your hands, say they ached, put cream on them and then had relief.

The kind of agony that Griffin had would send him to bed in too much pain to leave it for food, join the family, or to do anything else but stare at the ceiling. His muscles hurt, his toes and fingers were so painful they couldn’t be touched, his joints caused him to move like an old man. It hurt to breathe. Griffin’s Lyme disease tested his body, it tested his strength.

It tested our entire family.

But then little by little we started to see some progress. Some symptoms improved and we were left to see what damage remained.

It’s been a little over 4 years since Griffin was finally diagnosed with Lyme disease and began his treatment. His takes medication and his conditions are being managed.

Our border to border walk would have tested even the most fit person, but for Griffin, the walk challenged him on a daily basis. The pain he felt each day was magnified by his Lyme disease.

It wasn’t fair, but it was what it was. Either you moved forward or you didn’t.

Griffin had long ago made the decision to move forward and each day on our walk he was the first to tell me – “Come on Mom, we can do this.” 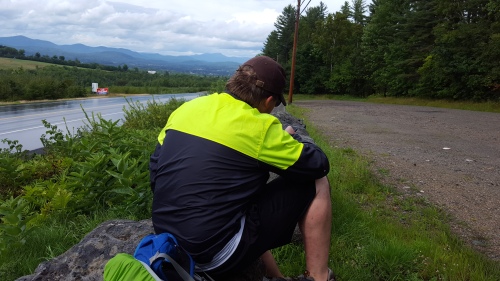