Even though we had some shade coverage from the trees on either side of the road, when the sun shines overhead, it’s not an advantage that is likely to help.

I’ve heard of people hiking 20 miles a day (and of course those fictional 16 year-olds from Stephen King’s The Long Walk – walked 4 miles an hour for days) but we were not able to achieve that kind of distance or keep to that pace.

Mountains get in the way of even the most determined walker. As does being out of shape, hard, hot roads, not enough to drink and no rests.

Here’s one for you:

The damn-dam we had pinned our hopes on for a rest was still not in view even though we had walked well over 2 miles from where we had thought it would be – uphill it seemed the entire way. We believed that it would be just around the corner and each time we were sorely disappointed. (Mistake #10 – always have a map.)

Our feet and backs hurt and our spirits were flagging. Songs stopped and bad tempers poked their way into our thoughts. We stopped only long enough to either drink water or to release that water from our bodies. (Arguably, I did this much more than Griffin did.)

It hadn’t occurred to us that we could take a long break before that which had been planned. 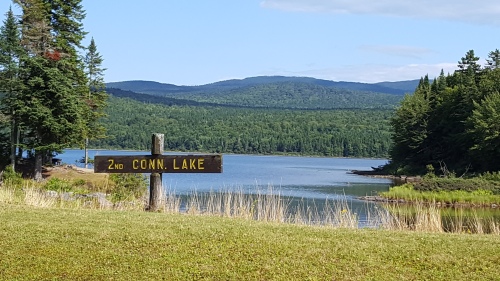 Finally, finally we turned a corner and there was the sign informing us of our destination. What we had thought was 4 miles turned out to be 9. A length not so great when you are strolling through dense covered woods, but an impossible stretch when you are carrying a heavy unsecured pack, with too little water intake, no sun coverage and while walking on a surface hot enough to bake the proverbial egg.

We both collapsed on the state manicured lawn by the dam being careful to avoid the goose droppings everywhere. Immediately we took off our shoes releasing hot, swollen feet to the (relatively) cooler air and exhaled a sigh of relief. 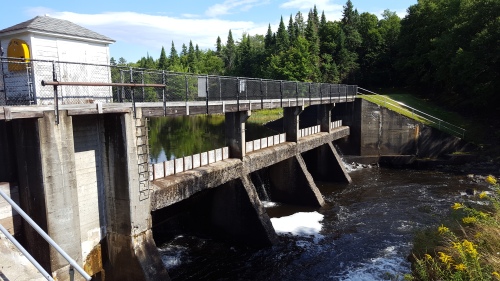 Because there was no place to buy food or drink, we opened our packs and took out our bars, nuts, and seeds. How we both longed for a sandwich with a cold drink, but instead I opened my pack of organic, grass-fed beef jerky with nuts and dried fruit. I should have tasted the jerky before I had purchased it (only the best from Whole Foods right?) as I could barely get down more than a few pieces of what tasted to me like dried bloody meat. (which, because that is exactly what jerky is, I’m still amazed that I found this surprising.) (Mistake #11 – taste your food before you pack it.)

2nd Connecticut Lake was only 6 miles from our end point. We swatted at bugs, ate our meals (or at least ate what we could of them) and with renewed spirits laced ourselves back into our shoes when 30 minutes was up. We didn’t think we needed any longer than that, our legs felt good after the break. (Mistake #12 – rest, rest, rest.) To our credit no blisters had developed and I had the momentary thought that maybe I should dump the heavy roll of hiking tape when I got the chance. (Mistake #13 –don’t count your chickens before they hatch – always be prepared.)

We had a schedule to keep and didn’t want to delay. Our plan was to get to the local town store (which had promised us a lunch when we arrived) and then check into our cabin early enough so that we had time have a nice dinner and explore the town in the early evening.

The way out of 2nd Connecticut Lake was by way of mountain. Uphill.

We trudged and trudged, muscles ached, bellies cried for something more substantial than dried raw cow, and eyes squinted from the sun. (Mistake 14 – sunglasses go on early and stay all on all day.)

Neither of us talked for a few miles. Griffin walked to the tops of inclines and then patiently waited for me to catch up.

“You okay?” he’d ask me watching me huff and puff.

When Griffin would be quiet for too long, being a mother foremost which includes the role of cheerleader, I’d turn to him.

In this manner, when one of us slowed, the other was there to help bolster support. (Protip #2 – always hike in pairs.)

With baking feet that, in Griffin’s words, felt like “someone used that spiked meat hammer in the kitchen to hit the bottoms of” we slowly made our way over the next 6 miles.

One mile away from our final destination, our feet and bodies were so depleted that we had to stop every quarter mile.

“It’s not far sweetheart,” I told him when he called for the break.

“Mom, we’ve got this,” he’d say when I told him I couldn’t go on without sitting down for a few minutes.

And then, glory to all, we saw an “Open” flag in the distance. Like a mirage to a man dying of thirst in the desert, we picked ourselves up with renewed hope and stumbled to what we both, at this point, knew was our salvation in the form of cold drinks and spot in the shade to stop, get out of our packs, and off our feet.