The other day I got an email from a local reporter. She was doing an article about the predator activity in our town, could I send her some comments? I’m also a writer and I’ve done some freelance work for her newspaper. Of course, I’d help her out.

I sent her a few sentences on what had happened with regard to our coyote, fox, and fisher attacks. Gave her some statements on what my concerns were and that I was glad to see the word was getting out to others. We all need to protect our animals and be vigilant was my message.

Next I get another email from the reporter, could she stop over to take some photos of the chickens?

Sure, must be a slow day but come on over.

Around 5:00 p.m. my son hollers into my office. “Hey mom, someone is in the driveway.” I get up to answer the door. A woman dressed in a (to die-for) black dress tells me she’s with FOX news.

“We’re here about the coyote.”

Really? That’s kind of strange. I had mentioned our attacks on a local Facebook page earlier in the week, but we hadn’t seen any activity for a few days. I didn’t really think of it as breaking news, but no one can accuse me of being an ungracious host.

“Come on in, the chickens are over here. Um, you might want to change out of those open toe high heels first though.” I said to the reporter knowing that chicken poop was defiantly going to clash with that (again, to die for) dress of hers.

While the reporter and I talked, I showed her the chickens while the cameraman filmed away. Marc and I gathered and gave her a dozen eggs and waved goodbye as they drove out of our driveway.

“Well that was weird,” said my husband.

I went into the kitchen to get dinner started when there was another knock on our front door. They must have forgotten something I thought.

In our driveway was *another* news crew.

“Are you here for the girls or the chickens?”

Chickens. They were also doing on report on the coyote activity.

I showed them the chickens, went through the details of our attacks, and afterward, we sent the reporter home with yet another dozen eggs.

We ate our dinner that night with one eye toward the driveway, but that was it for the news crews

It’s easy to count your blessing when you live in a place where a top news story is about the local wildlife being out and about. 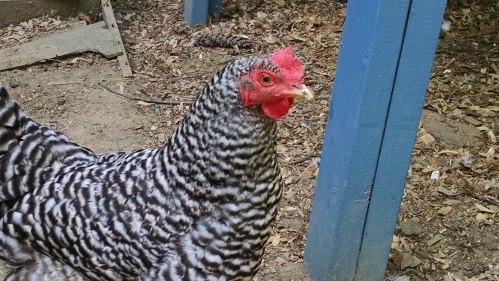