Lesson 1230 – And you thought the Wicked Witch was scary

Saturday I was drawn to the window by the constant crying of a small bird. Much like when you’re a mother and a baby cries, when you own chickens, you can always pick put a cry of distress.

I followed the noise to the kitchen window and I saw a smallish-brown-with-horizontal-stripes bird tearing away at a (poor little) blue jay. Absolutely ripping and tearing – that bird was vicious.

As the jay was still faintly crying out, I tried to go out back to “shoo” away the invader, but as soon as I opened the door, the bird took the jay in its feet and flew deeper into the woods. A vicious little bird with lots of strength.

What on earth had that been?

We have hawks around our neighborhood but I’ve never seen one so small and so brutal. The juvenile hawks I’ve seen tend to be a bit more on the timid side – still learning how to hunt from mom and dad.

This bird was anything but timid, it was ruthless.

It might have been a young peregrine, ventured Marc, when I told him about it.

Ah, yes – the peregrine. The medium-sized light-bellied, dark-backed bird that wreaked havoc in our yard last year (and who eventually grabbed our little Isabelle.)

I looked up what a young peregrine falcon looks like and there it was. The brown with stripes bird that I had seen. 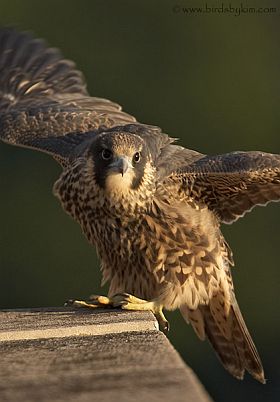 Peregrine falcons are on the state (not federal) endangered list and because of this; people are going out of their way to repopulate them in New Hampshire. There is a nest a few miles north in Manchester where they have cameras and in the spring you can watch the eggs hatch. Obviously the program is successful; these birds are now free to roam the area.

And they are very good at what they do. They are extraordinary hunters and killers.

Don’t get me wrong, I’m all for reestablishing an endangered species into the environment. It’s the right thing to do – unless the falcons have figured out that your backyard, with its chickens and feed on the ground is essentially an all-night diner.

When that’s the case (as it apparently is), I say to them, endangered or not, if you want to come into my yard, so be it, but just be wary of the crazy chicken lady running toward you with broomstick in hand to chase you away from her girls.