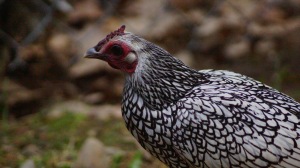 Our beautiful, beautiful Isabelle is dying.

It’s not unexpected. She is a bantam Silver Sebright with very little body fat on her and quite frankly it’s a surprise that she’s even lasted this long during our long and bitterly cold New Hampshire winters. There is a reason the “state” birds are so named. Rhode Island Reds, and New Hampshire Reds are all larger birds that carry more body weight than the bantams, the reds tend to easily glide through the colder months, bantams not so much.

Even still, Isabelle persevered and came out the other side of each winter into a warming spring, 5 times in a row.

Isabelle is one of the original members of our flock and when I got her, she was already a year old. In NH chicken years that currently makes her, about 100. We had already started our first batch of chicks and I went to the local chicken swap just to see what was there. In a cage, stood this magnificent creature – “That’s a chicken?” I asked, thinking that perhaps some kind of exotic pigeon got mixed in with the lot.

Not only was she a chicken, but she was also for sale.

I immediately purchased her and brought her home to the family. “You are not going to believe this chicken,” I told everyone, as I opened the box for them to see.

“Let’s name her Belle, after Beauty and the Beast,” offered one of my daughters.

“No, let’s name her Isabelle, so that we can reply “yes” when we hear the question – Is she a beauty (belle)? – (Isabelle?),”  said my son who was taking French lessons in school.

And so with humor and respect, we named our newest flock member – Isabelle.

Isabelle opened our eyes to the world of exotic chickens. I credit her with us looking at and actively seeking different breeds of chickens, not just going for the standard egg layers.

She brought welcomed diversity to our flock. Isabelle is the standout in our flock that *everyone* first points to. “Look at that one,” children constantly say to their mothers. Our little chicken is a teacher to all.

And now Isabelle is dying. She had a growth (it looked almost like a wart) on one eye and now there is one on her other eye. Isabelle is currently blind.

But she’s not in pain and so I haven’t brought out the killing cone yet (but the second she does appear to be in distress I will have it ready, I love this bird too much to let her suffer.)

Although she is not sneezing or having trouble breathing, she is in isolation. We’ve placed food and water in her cage (she’s actually in the ex-rabbit hutch which makes a terrific chicken-ICU) and we’ve shown her where they are located. She can find both and she’s eating and drinking.

For now, I’m leaving her in the rabbit hutch. Several times a day, I go out and check on her, speaking her name gently before I put my hands in the hutch to stroke her beautiful feathers. We’ll all be watching our Isabelle closely and have promised to take care of her, a member of our flock, for as long as she needs us to.