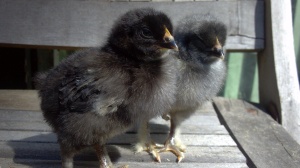 I had been dreading the day.

“They’re not that loud, not like some of our other roosters,” I kept trying to convince myself.

And then Saturday morning came.  Actually it was 5:30 a.m. when I was awakened by the boys.  First one, then the other, then the first again – a testosterone fueled non-stop concert of the day.

Here is was – a Saturday on a holiday weekend and our roosters were loudly singing to beat the band. I don’t think I need to tell you that that was not a healthy situation for positive neighbor relations.

If our boys were waking us up, you knew that my neighbors were also being awakened and were silently plotting their revenge.  Note: in our town, we are allowed to have chickens (including roosters) on our land, but there is that tricky part about a noise ordinance that gets rooster owners every time.

The time had come.

I contacted a friend of mine (hi Linda) who had said she would re-home both birds and at 5 p.m. I began the 2 hour drive to find my pals a new home. On the drive down, I told them that it was better this way – they’d have lots of land, they might even get to be dads – that they’d continue to be with each other.

And that they wouldn’t get killed by our neighbors (or my high school daughter who was in a snit most of Saturday because “those stupid roosters woke me up early!”)

During the car ride to their new home, we sang John Denver songs and when we had had enough of that we sang songs from the “Lion King.”

Linda and her husband met me in a parking lot. Without much fanfare, we moved the boys from my car to their truck, spoke about chickens and ducks, hugged and then I was on my way.

The yard is quiet these days. There is no coop alarm when a cat comes into the yard, the sun rises, or a branch falls. The silence is heavy.

It’s the right thing to do, I know it is.

But man, I’m going to miss those little friends. 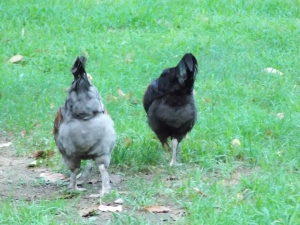 ***
Wendy Thomas writes about the lessons learned while raising children and chickens in New Hampshire. Contact her at Wendy@SimpleThrift.com