Lesson 730 – Once Upon a Flock by Lauren Scheuer – Giveaway

Lauren Scheuer is definitely a rare bird. She’s one of those people who has tremendous talent, a huge heart, and is someone who understands chickens  – a winning combination in this game called life. She’s written a book about living with her backyard chickens and forgive me, but I’ve just got to crow about this accomplishment! 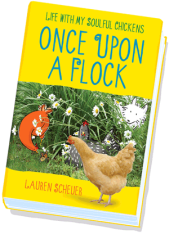 Lauren and I found each other on Facebook years ago, I had seen her chicken art from her fabulous blog Scratch and Peck, (if you haven’t seen it, go over now and have her illustrations make your day) and she had noticed I wrote about chickens. We started conversing. When chicken people meet chicken people, nothing can stop us. It was a friendship meant to happen.

It was Lauren who invited and organized the NE chicken ladies (Hencam, Tilly’s Nest, Scratch and Peck, and me, Lessons Learned from the flock) to attend the Northeastern Poultry Show two years ago in January.

It was a cold day, the kind of day where you think twice about retrieving your water bottle from your car parked at the far end of the lot. (Then you realize, there’s no need to fetch it because it’s probably frozen solid anyway.) We all showed up at the designated meeting place.  We met.  We clucked with each other over food.  We saw the most incredible chickens.  We left with newly found chicken friends.

And I also came home with Charlie. 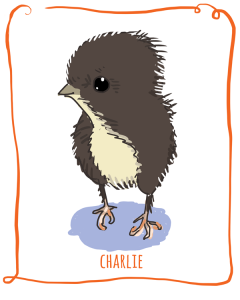 At the poultry show, there was a breeder who had newly hatched Black Copper Marans chicks for sale. One chick, later to be named Charlie, was going to be destroyed because she had a genetic aberration that caused her feet to be mangled. No breeder wants that kind of chromosomal bump in their flock. I, however, convinced (begged) the breeder to let me take the baby home and at least give her a chance.

No one expected Charlie to survive.

Lauren oohed and ahhed over little Charlie. She fully understood the desire to help another creature who was down on her luck. After all, she had gone through a chicken-ICU episode of her own when she nursed her chicken Lucy who had contracted Marek’s disease.

Lauren understood and for that reason, I christened her Charlie’s “fairy Godmother” for without her planning the trip, I would have never gone, and without her immediate, positive and unconditional support, I might have had a bit more trepidations about bringing a chick home. To my husband.  In the freezing weather of January. While living in New Hampshire.

At home, my son and I performed surgery on Charlie’s feet to release her toes and then we had her do physical therapy (up on the roost, off the roost, up on the roost…) to straighten and strengthen her toes.

Charlie fully recovered from the surgery but as we couldn’t put a chick outdoors in a New Hampshire winter, she ended up living in our house for the next 6 months.

Charlie, by simply being Charlie, ended up filling a gaping hole in our lives that had been ripped open by a son who was desperately ill and 2 family dogs that had recently and unexpectedly died. Charlie followed the family around, watched the Super Bowl with us, perched on our shoulders as we read, and came running like a puppy when called. With humans and a dog as her flock mates, she soon adapted to being a house chicken.

Charlie became a member of the family. 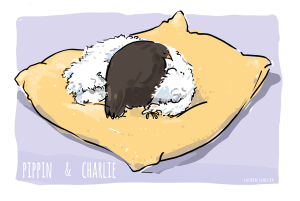 When I was struggling with my son, wanting to pull him from college to bring him home so that I could care for him and keep him protected against the world, Charlie taught me that sometimes, the bravest and most loving thing you can do for someone is to push them out of the nest into the world, where they really belong.

Lauren understands those types of life lessons that you learn only when you fully invite someone else into your life. In Once Upon a Flock – Life with my Soulful Chickens, Lauren shares the compassionate, heartwarming lessons after lesson she has learned from her flock. Well written (on some of the best paper stock I’ve ever felt in a book) and filled with Lauren’s trademark photos and art, she brings us through life’s cycles with her chickens. She rejoices in the good times, and fully embraces the more difficult ones. She knows that with the unconditional support of your flock members, you’ll be able to weather the sometimes heart-crushing storms of life.

Birth, youth, and eventually sickness and death, to get a little Zen on you, Lauren shows us that life is what it is. In Once Upon a Flock, Lauren lets us know that there is so very much you can learn from chickens, if you only take the time to listen.

Once Upon a Flock is an absolute must read for chicken owners and for anyone who understands the connections between people and animals. Although there are some wonderful tips (coop building, anyone?) on how to take care of chickens – it is, above all else, a story of love and respect to which mama hens and flock members everywhere will be able to relate.

This blog post is part of a blog tour. Check out these other blogs. Lauren has drawn art specific to each of these blogs’ stories and if only for that reason, go look at them and smile.

Lauren’s blog is Scratch and Peck go look at some lovely artwork that will make your day.

You can win a copy of Lauren’s fabulous book, Once Upon a Flock. Just leave a comment on this post and one of those comments will be randomly chosen. Make sure that  you have a way for me to contact you should you be the winner.

The winner will be chosen on Thursday and will be announced on Friday’s post.

By the way, Lauren did the illustrations of Charlie for this post. Just looking at them brings a tear to my eye. Thank you Lauren, thank you so very much.

***
Wendy Thomas writes about the lessons learned while raising children and chickens in New Hampshire. Contact her at Wendy@SimpleThrift.com

Tagged as Charlie, chicken books, chickens, Lauren Scheuer, lessons from the flock, Once Upon a FLock