I gave a chicken workshop recently where I admitted that although I have slaughtered a few of our birds, I haven’t eaten anything from our birds other than the eggs they give us.

Yup, I prefer instead to go to the local supermarket and purchase an antibiotic, hormone filled piece of decaying meat which I then serve to my family.

I know it doesn’t make sense. After all, one of the reasons we have chickens in the first place is so that we never have to buy another lifeless (in the true sense of the word) eggs, ever again. It is only in having chickens that I’ve realized what a real egg is supposed to taste like. Why wouldn’t I extend that thinking to their flesh?

Part of the reason I don’t eat our chickens is because I spent 7 years of my life being a vegetarian. The thought of something dying for my meal, still creeps me out. While I do eat meat now (several pregnancies where I craved nothing but meat solved that) there are still types of meat I do not eat.

I won’t eat organs, lamb, frog, veal, and rabbit, in fact, pretty much the only meat I eat is chicken, fish, ground beef, and a steak tip (from the grill) every now and then. So you’d think if I’m going to have meat, I’d have the best there is, right?

In theory that sounds good, but when I would end up paying about $6 more (almost $9 when it’s on sale) per chicken, I usually end up with the grocery store brand, especially when I’m buying food for 8 people.

The other thing is that I’ve named my chickens, some after New York Times best sellers to whom I gave a promise that their chickens would never be eaten. (Search for “Good Egg Interviews”)I’m a writer and a believer in karma and I’m sure not going to go back on that promise.

Then there are our chickens who act more like puppies. They run up to us. They jump in our laps and want us to stroke their backs. They converse with us while we sip a drink on the back porch. They have become our friends.

And then, of course, there’s Charlie.

At the workshop, I had said that my goal was to eventually eat one of our chickens.

If it were a life or death situation, I’m sure I would be able to. Go ahead and bring that zombie apocalypse on.

But until then, especially after writing this and remembering the good times with my flock, I think what I’ll do instead, is save my change in a jar and then bring that extra money with me to cover the difference so that I can buy the clean chickens the next time I go shopping. 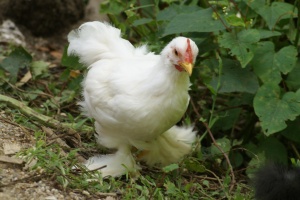 I write about the lessons learned while raising children and chickens in New Hampshire. Contact me at Wendy@SimpleThrift.com