Lesson 618 – Releasing of the chicks

This morning was our annual day-before-the-first-day of school party. I’m not even sure how this little tradition started but we’ve been doing it for years. It’s a great way to celebrate the end of summer and transition into the beginning of a new school year.

So how does it work?

First, the night before, the kids go to bed according to our household “school-week” rules. That means absolutely no TV and although we have a few staggered bed times based on ages and grades, it also means that most of the kids are up in their bedrooms by 8:30 reading with lights out by 9:00.

Which meant that last night, Marc and I were able to sit and – quietly and uninterruptedly – read in the TV room for pretty much the first time since school had let out last June – imagine that!

This morning, the day of our party, after we had roused the kids at 6:30 am by banging on pots and pans and singing our best renditions of Girl Scout campfire songs (at least the ones I could remember) we put bacon in the frying pan, coffee in the machine, and set the table with freshly baked muffins, bagels with cream cheese, slices of melon and an assortment of berries.

Most of the kids drank orange juice while a few of the older ones and the adults attacked the coffee.

We ate on the back porch, the morning still young, and because of the chill (this being New Hampshire) at some point everyone went indoors for a sweatshirt. Talk consisted of how the weather had changed (and how, if this was any indication, they were going to have to be sure to wear sweaters to the bus stop), to which teachers everyone had (including tips on how to best get along with them), and which activities were worth trying out for and which were a waste of time.

Addy is just entering High School, she plans on being on the FIRST team and on the Swim Team along with her brother, Logan. On the other hand, Trevor is at the end of his high school career and just wants to get through it so that he can move on to the next phase.

The two oldest boys, Spencer and Griffin, can’t wait for the freedom that going back to college brings.

And Emma wanted to know if I could take her shopping later in the day so that she could get decorations for her locker.

It’s another school year with another set of grand adventures. I looked out at my flock of chicks –  so eager to leave the nest after a long summer – took another sip of my coffee which was cooling in the early morning breeze, and smiled. 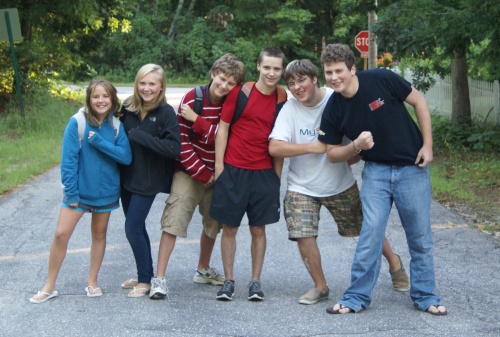