Lesson 512 – Not so sure about this State chicken bill

It’s chick days at our local Tractor Supply Company! Hooray, I can take my kids into the store and we can get our baby chick fill without taking any home.

Of course the reason we don’t take any home is that in New Hampshire, by law, you have to buy at least 12 chicks at a time from a feed store. This law, established in 1985, was meant to protect the agricultural farmers. If you recall, New Hampshire is a bit on the rocky side – Granite State anyone – and we tend to have a fairly large contingency of live stock around to get us through those tough winters. At one time you’d find many large poultry farms throughout the state. (My parents honeymooned in New Hampshire and we have old black and white photos of my mom standing in the middle of a flock of birds at a turkey farm.)

This requirement also served to protect the chicks. Baby chicks are inexpensive. Cheap enough that a kid with a few dollars could walk into a store and buy a chick to bring home in his back pocket. The problem with baby chicks, though, is that they grow. And just like the puppies and kittens that are abandoned when they are no longer cute, chickens also are “freed” when they grow out of their soft and fluffy stage. Too often they are freed into backwoods or local neighborhoods (especially those pesky roosters.)

I wrote to our local Representatives and Senators about this letting them know that the law was outdated. It was written at a time when people were not interested in smaller backyard flocks. A minimum of 3 birds at at time would be a good compromise, I suggested. It would allow backyard chicken owners to replenish a small flock (hey, birds die, especially over the winter) with fully vaccinated birds and the 3 minimum would also still protect the chicks from being bought by those who might not be serious about raising and caring for chickens.

I was told by our Representative that there is a current bill (HB 1231) that has passed the House and is now in the Senate to repeal all restrictions on the purchase of all birds and (interestingly) rabbits. (Having just bought a single rabbit last summer, I had no idea that there was any requirement on them in the first place.)

Although this is a step in the right direction, I personally would have opposed this bill as it opens the door for too many people to buy just one chick (and I’m specifically talking about chickens although this bill covers all birds and those adorable little bunnies.) A minimum purchase of 3 would allow the backyard owner easy access to a small amount of birds while at the same time, it would protect the chicks from those who may not be serious about taking care of them. 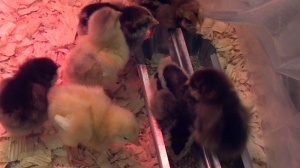 Who could resist? That's the problem.

Hopefully, it will be the conscientious chickens owners who will buy the birds and not a young child hoping to get a cute plaything for the day.

How about you guys? Are there any purchase restrictions on chicks from a feed store?