First of all I want to say that I am not a stalker. I prefer to think of myself as a great admirer of things fine.

When I went to the Northeastern Poultry Congress this past weekend, it hadn’t occurred to me that Jan Brett would be there. And not only there but with her polish chickens, no less!!

As a mother of 6 I have read (and re-read, and re-read) many childrens’ books illustrated by Jan. She has beautiful illustrations that are as calming to adults as they are to children.

I’ve even contacted Jan (through her agent) about an article I was writing on hen houses. Here’s a little fact – Jan has noise insulated hen houses for her roosters.

After I had left the Willy Wonka of chicken salesrooms, I walked down the hall to the exhibition hall.

Gasp. The first thing I saw was a row of Black Polish show birds. After having just decided I couldn’t buy any (because they were sold in pairs) this was just cruel. Life was taunting me.

But still, I can appreciate beauty when I see it. I approached the birds, slowly working my way down the row talking and cooing to them as only a chicken lover does, telling them all how pretty they were.

And then I came upon a woman in an apron who was taking some of her birds out of the cages and spraying their feathers. Must be the owner. I went back to the birds.

“Are you Jan?” I asked preferring not to say what I was actually thinking which was “OH. MY. GOD, YOU’RE JAN BRETT, RIGHT?”

“I write about chickens I started telling her. “I have a flock at home and I’ve always lusted for a Black Polish. You have absolutely stunning birds.” I told her.

“Thank you.” And then she said, “Would you mind holding this one for a few minutes while I clean up?”

She put one of her male birds into my arms where he docilely sat while I stroked his back.

“His name is Pasquale,” she told me.

I was talking to Jan Brett, holding one of her birds at a chicken show. Life is kind of good sometimes. 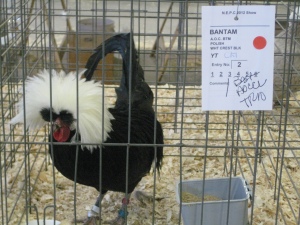 “Such a calm bird,” I said. Jan went on to tell me a little about the breed and how lovely and gentle they were.

I then asked her about her hen houses and if she really did have a noise insulated one. She said that she did but that she only used it for the roosters in the winter, in the summer, all her birds were allowed out.

“It’s to keep some of the noise down for the neighbors,” she said.

Oh, don’t I know about that, sister. I thought, now lusting not only after her birds but her noise insulating hen house.

I then talked to her about her chickens, I knew from my article research that she was introduced to the breed when she needed models for some book illustrations.

“That’s what happened with me,” I said, “I had a few chickens and then I fell in love with them. I had no idea they had such interesting personalities. It only takes one to get you going.”

“Exactly,” said Jan, as she put down her supplies and got her final bird ready.

Eventually she gently took Pasquale from my arms and put him back into his cage. Not wanting to look too much like a groupie, I thanked her and walked away.

Afterward, I was thinking, no one is going to believe this story, so I turned around and took a photo of Jan walking away, that’s her in the green shirt.

And here she is talking to someone who sigh is buying a pair of her chickens.

Here’s where I have to remind you that I’m really not a stalker, but come on, someone who works with books and who loves chickens? That’s like telling me not to come home from a chicken show with any more chickens.

Toward the end of the day when her booth had slowed down (because most of her chickens were sold) I talked to her again.

Jan Brett with one of her birds

“Do you mind, if I gather up some of your chicken’s feathers?” I asked.

She gave me permission and like a fan gathering the tossed off towel of a rock star, I picked up the beautiful black and white feathers. It’s not time for me to have a Jan Brett Black Polish right now, but as far as I’m concerned, I have the next best thing. 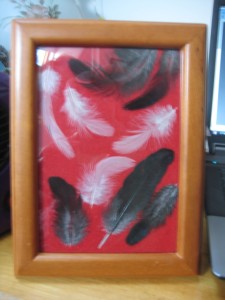 And as an added bonus, here’s an extra shot of Pasquale – ahem, AWARD winning Pasquale (I got to hold an award winning bird, she giggled.)