One of our chicken friends (Stephan, not Stephen – for those who read the comments) sent me the following photos this past weekend with the subject line of “Over achiever!” It seemed that when he went out to his henhouse, this is what he found:

Here’s another photo showing the size.

That is one big egg!

One of my favorite stories when I was a kid was a book called “The Enormous Egg.” It was the story of a large egg, found in a chicken’s nest that when hatched turned out to be a dinosaur (hey, it could happen.) The story ends happily (if you haven’t read it you should) and my entire life, I’ve been waiting and hoping to find a dinosaur egg in a henhouse.

This weekend I thought that maybe there was a chance with Stephan’s egg.

Wonder what’s in that thing, I told him, holding my breath, not even daring to hope against hope.

Stephan cracked the egg and this is what he found: 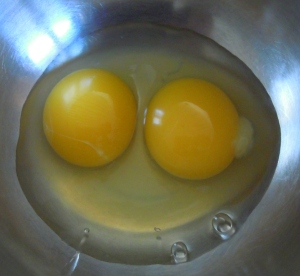 Actually from a hen point of view this is good news. I had been worried that there might be an egg within an egg, not necessarily a bad thing but something that would require watching the hen for a bit to make sure that all was well in eggland.

So although, the enormous egg did not turn out to be a dinosaur (*sigh*) it did turn out to be a full-sized yummy breakfast, and when you’re an adult who *knows* in her heart that dinosaurs really can’t come from chicken eggs (or at least acknowledges that no one to this day has definitively proved that that can’t happen…) sometimes, just sometimes, that pan of eggs can be just as good.