Late last night, we found out that power was restored to our house. Oh callooh callay!

The kids were a little upset, they had to be pulled away from a movie that had been set up on a projection screen for all to watch. They hadn’t finished the large cups of popcorn everyone viewing the movie had been given.

The kids were tired, out of sorts and they had finally had it up to here with disruption after disruption. It showed in the bickering in the car on the way home.

Brush your teeth, get into bed, I kept repeating when we got home, we’ll find your math book in the morning.

Today, the kids are at school. Some of them are wearing socks they’ve had on for days, some are in need of an extended hot shower. All had to take cold items in for lunches, apples, granola bars, even the last of the emergency poptarts.

But they are back where they belong, in a routine that feels familiar. A life that feels in control.

While they were away, I walked around the house assessing our home that we had to leave so quickly.

The Halloween decorations are still up but as the town has moved trick-or-treating out to this coming weekend, they will remain up at least for a few more days playing games with my mind – witches and skeletons in the snow. 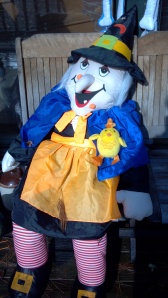 Limbs in the yard will need to be gathered and chopped in preparation for the wood stove which we WILL be getting. 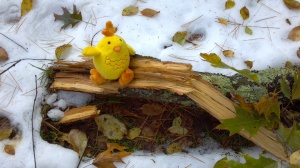 The rabbit, Vivian, is fed and watered, none the worse for the wear, intrepid spirit is she.

Pippin, so ecstatic to see us that it took all night for him to settle down, is beginning to genuinely believe that we won’t be going away again.

Once again, the flock is whole. We have come home, where we belong, to roost.