Just as it is with children, when you have a slew of chickens sometimes it’s tough to keep track of them.

Oh the distinctive ones are easy enough to keep straight, Simon with her black polka dots, Morganne with her demure beard, and Spencer with his enormous 6 foot 4 inch height. But it’s the ones we purchased in batches, more specifically, the feed store bunch who are the most difficult to tell apart.

One might even be inclined to say that when you’ve seen a Golden Comet, you’ve seen them all. But while they may look very similar, as any chicken owner out there will tell you, each bird is uniquely different.

And when you have a fairly large flock, it can at times, be difficult to keep track of them all. Our birds graze in the enclosed dog/rabbit pen during good weather. We also have hawks, raccoons, and that lousy neighbor’s cat constantly in our yard. For safety’s sake, we need to be able to keep an accurate count of our chickens.

For weeks the kids have all been writing school introductory essays for their teachers claiming that we have forty chickens.

I’d edit each essay to thirty-nine.

Are you sure? They’d ask me.

So this weekend while mucking out the hen house we finally took an official tally of our birds. Marc and Logan spent the better part of Saturday afternoon catching each hen and matching her up to our master list. We had previously banded our birds using plastic bands – which wasn’t the best of ideas, over time many of the bands had fallen off. But because we didn’t have metal ones (they are not cruel and in fact our Zelda sports one) we had to replace and check those bands on all but the chicks (they’re just a wee bit too small right now) and hope that this time, they stayed put. 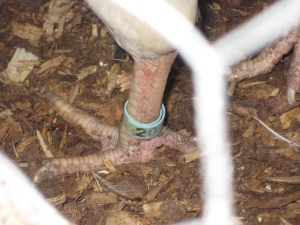 We found that we did indeed have thirty-nine birds. I was right, I told Logan, my budding rocket scientist/ mathematical genius.

He scrunched up his face. I could have sworn, he trailed off…

He got on his knees to look under the overhang of the hen house, a deep 6 foot pocket where the chickens will go to hide and if sick, we’ve found out, to die. Sure enough in the far back corner he found a mature Amberlink who had died. Marc checked the carcass, no obvious wounds, no swelling.

There was no joyous winner in this one.