Last Friday night I went shopping with my daughters Addy and Emma. Addy wanted to buy a pack of press-on fingernails “It says they stay on for 24 hours” she whined to me when I said they would fall off during swim practice (which she has every day). Nope and still nope was my reply.

Then early Saturday morning at a yard sale Emma spotted a nifty gun that spat out Maltese choke-able sized balls. Absolutely not I said when she started pulling out her quarters. Wah – she puffed and went back to the car to sit in the back seat her arms folded across her chest.

Then we went to the local chicken swap and I started talking to the breeder from whom we had gotten our lovely seabright hen: Isabelle and our chicken-chicken Morgane. Along with some chickens (which we didn’t get) she also had bunnies for sale.

Can I hold one asked Addy? Sure go ahead but there’s no way I’m going home with a bunny so don’t even ask. She picked up the bunny and literally squealed with delight.

Pleeeeeeeeeeease? She said making one or two vague promises like I’ll do the dishes everyday for the rest of my life.

Nope. Absolutely not. We. Do. Not. Need. A. Bunny. We have 10 newborn chicks at home remember? If you glued long ears on our dogs they would pretty much look like rabbits, just play with them.

But then a funny thing happened. Addy put the squirmy 6 week old tiny bunny on my chest and it immediately calmed down and closed it eyes. There is not a person on earth who can resist the superpowers of a sleeping, bitty bunny.

Uh oh, we’re getting a bunny I thought to myself. Well sure, why not? Okay, we’ll get the bunny, just don’t tell Dad I advised the girls. And you have to take care of it I said knowing full well that no kid who has ever lived hears that part of the conversation.

Here’s the thing about buying bunnies though, you can’t just buy a bunny, you also have to buy a cage, food, and bedding. It’s what you have to do when you buy a bunny so that’s what we did. I ended up spending far too much on a pet I didn’t even know we needed.

Now we have a bunny to add to the mix. Her name is Vivian Alice (the Alice part comes from the rabbit in Wonderland), she’s the white one in the middle and between the chickens, dogs, kids, and now bunny, that official makes us – according to Spencer anyway – one pig and two goats away from legally being a farm. 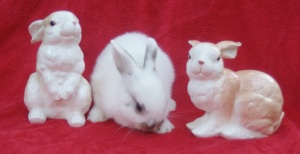 Oh and by the way, whose the best mom ever? Just ask my press-on fingernail-less and small ball gunless daughters. They’ll tell you who.