This is a post about a new book recently published featuring New Hampshire Writers. You may not think it has anything to do with chickens but just do me a favor and read it to the end.

Much to the delight of horror-story lovers everywhere, Live Free or Undead – Volume #1 of the New Hampshire Pulp Fiction Series – Edited by Rick Broussard has just been released. (PLAIDSWEDE PUBLISHING, 2010 – 293 pages, $19.95)

If you grew up loving (and I mean LOVING and taking it with you everywhere) that little Alfred Hitchcock magazine, then you’ll have a great time with this book. It’s a complication of 20 stories from some of New Hampshire’s best and twisted writers. You’ll squirm with delight over this delicious collection featuring zombies, vampires, things that go bump in the night, deer by the side of the road, and yes, even Maple Syrup. (and if you don’t think Maple Syrup is scary try serving it on pancakes down south when what they had ordered and were expecting was something called “Pancake syrup”).

Now that the evening darkness comes earlier, you can feel the winter storms gearing up for the Farmer’s Almanac’s predicted “Harshest Winter ever”, and winds are whipping through those bare-limbed trees resulting in acorns constantly crash, crash, crashing against the roof, I can think of no finer pleasure than being bundled up in a blanket, safe in my immediate surroundings while reading about a world out there gone crazy.

You can find this book in local bookstores.

Now here’s the chicken part – Rick (the Editor of this book as well as the editor of New Hampshire Magazine) and his family decided to make the plunge this summer into urban chicken farming. After asking many questions about chickens (what so they eat, what kind of care is involved, how about them eggs?, etc) , they were ready to finally get their own birds.

This spring as you might remember, we ended up getting 2 dozen new chicks (on top of our already healthy and established flock), some – according to the statistics – were supposed to die, it’s the law of averages in action. Only one of our chicks died (thank god – a chick funeral attended by weepy children is not a pretty site).

That left us with a few too many chicks.

Take a look at this scanned image of Live Free or Undead’s back cover. Just let your eyes take in all the beauty that is there (can you say proud mama?) 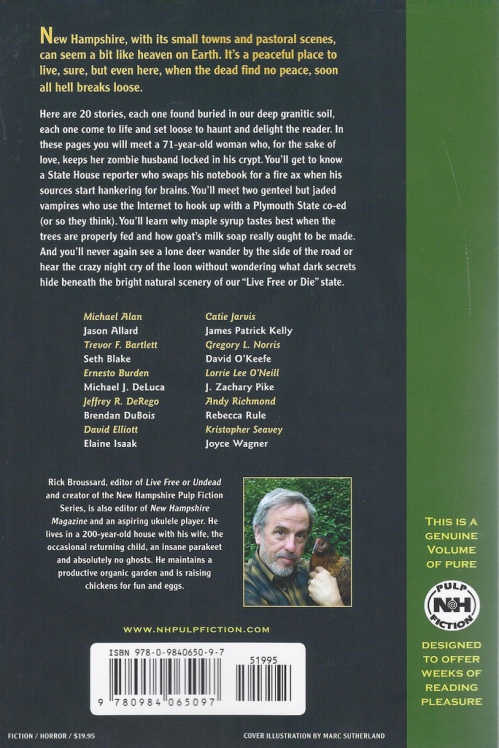